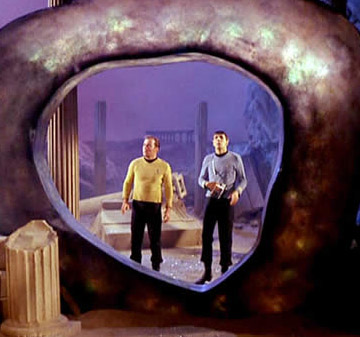 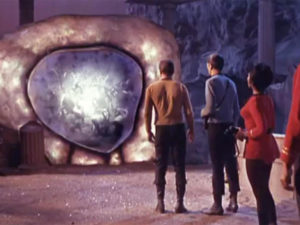 Anyway, Episode 28 The City on the Edge of Forever. Brilliant. Dr McCoy accidentally injects himself with a drug which sends him doolally. Hey, we’ve all been there. He beams down to a nearby planet and disappears through a time-hole, thereby changing the past and endangering the Enterprise’s existence. Jings. So Capt Kirk and Spock follow him and arrive in New York during the Depression of the 1930s. Now they wait for Bones to appear and stop him changing the future.

Spock wears a wooly hat to disguise his pointy ears and spends his time cobbling together a ship’s communicator from an old radio, an empty cornflakes packet, and some sticky-backed plastic. 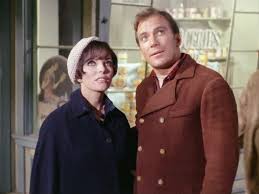 Captain Kirk meets Joan Collins and falls in love. Well, at least she’s not green. (see Episode 69 Whom Gods Destroy) Still, true love never runs smoothly for our Kirk and he learns that he can’t change his girlfriend’s destiny, so poor Joan gets flattened by a lorry. On the plus front, Bones arrives in time and they whisk him back to the Enterprise. I could watch this and Episode 44 The Trouble with Tribbles on a loop. 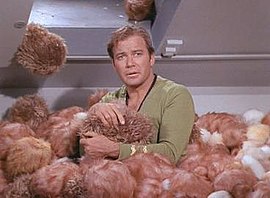 In case anyone was wondering – the Frasier episode was Our Father, Whose Art Ain’t Heaven.